Name: Sarabi
Year you graduated high school: N/A
Year you found out you were pregnant: 1994
Number of children: 1

The Uh-Oh Moment: For as long I can remember, the Pride Lands have been my home. I am very territorial so travelling wasn’t a huge thing on my to-do list. I was all about hunting with the other lionesses. It was actually my first hunting trip my mother let me go on by myself. I thought the butterflies in my stomach was the anticipation of my first kill. I knew I wasn’t nervous about being alone because some of my cousins from my pride were with me. But I knew something was off.

Then I saw the gazelle. It was injured from barely escaping a lioness earlier. It trailed behind the rest of the herd after they stopped at a watering whole. I crouched down as I waited for the rest to give us more space. I watched as the pride got ready to scare the stronger gazelles away, but I couldn’t steady my breath. Every inhale I took, my body would shutter and I would rustle the brush around me, alerting my dinner about his eminent demise. I had to move or rely on someone else’s kill. I didn’t want to bring home second-hand meat on my first expedition without my moms.

Right when I was about to pounce, my legs gave out. I threw up in my crouch space and my prey got away. I relaxed in the shade until the hunt was over and went home with my head hung low. As soon as I laid next to my mother, she knew what was wrong with me. I was carrying a king. 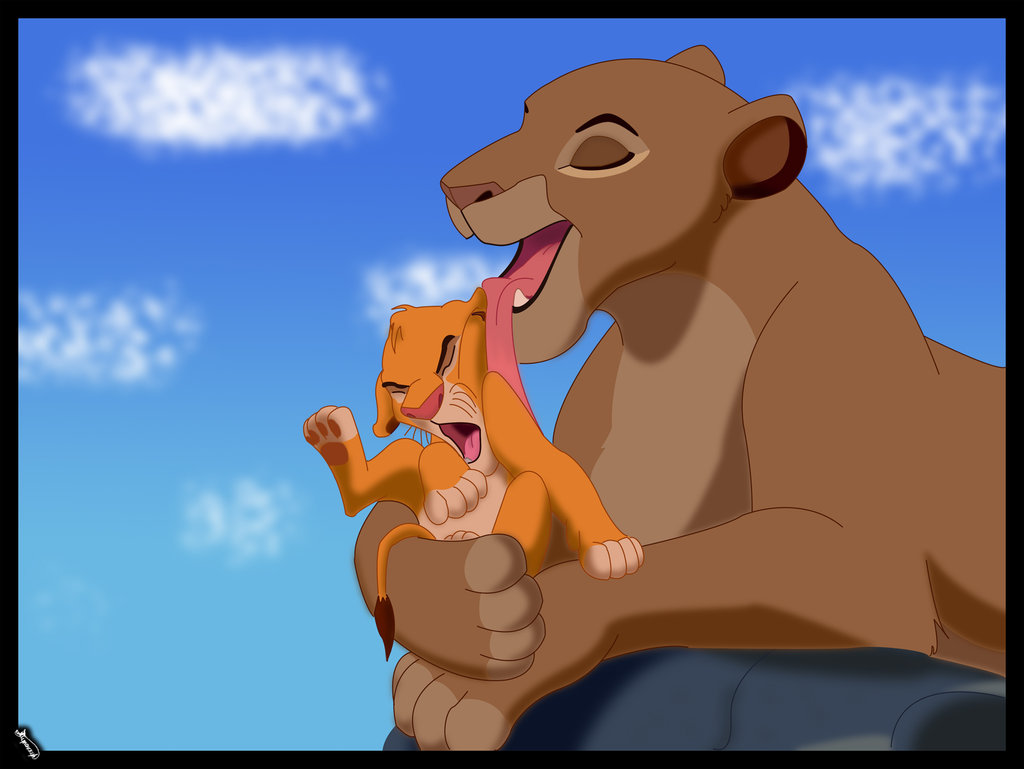 I was nervous. Mufasa was only a year into his reign as king and he had so much on his plate. His father’s rule was great and he was under a lot of pressure to continue that success. I didn’t know if he was ready for yet another huge change. But when I told him, he gained a new zest for life and kingship. His judgments were quick and always fair. He distributed the workforce among the animals perfectly and everyone lived in harmony as he made clear the principles of the Circle of Life. And never for a moment did I feel alone while carrying our son; Simba.

The Mom Moment: I became a mom when the local shaman Rafiki displayed Simba to all of the animals of the Pride Lands. He stood at the tip of Pride Rock and lifted him up for all to see. I couldn’t hear the roars, chirps, and hoof pounding. I was ready to snatch my son out of the crazy baboon’s hands until I felt Mufasa’s paw on mine. He hit me with a reassuring smile and nuzzled in my neck.

Father/Dad: He is a DAD, paws down. From the time he was born, to his last heroic breath, Simba’s father earned every strand of hair that crowned his mane. I never imagined that a man who had to look over hundreds of species of animals would still find time to dedicate every waking moment to his son. But then again, being the son of a king, Simba would not have a normal adult life. Mufasa knew this and and he did everything in his power to prepare him. From teaching him how to terrorize our trusted adviser Zazu, to telling him crazy myths about the stars in the sky, just to put his mind at ease and let Simba know that he would always be there for him.

Unfortunately, my husband died in a stampede accident. That same day, Simba disappeared. The Pride Lands fell apart and we were ruled over by famine, drought, and Mufasa’s jealous brother Scar, who allowed scavengers to move into the Pride Lands.

Them vs. You: Discipline, routine, and order. These are the things I learned from my parents which I immediately passed down to my son. If we don’t hunt, the prides don’t eat. If the lions don’t protect the pride, it leaves us vulnerable to other prides. We all have a role to play in our cohabitation. As a mom, I focused more on grooming and feeding Simba, while Mufasa took on more of his schooling. I didn’t have the chance to be there for Simba after Mufasa’s death, but the Pride Lands took care of him and brought him back to me safe, sound, and as wise, strong, and brave as his father. He also had help from a meerkat and a warthog.

Fearful Moment: I never got to grieve with my son. I actually grieved for him. When my husband, his dad, died and then he ran away, I thought I failed him. Should I have gone searching for him? Was I doing the responsible thing as the Queen of Pride Rock by staying around? I didn’t know if my son was in denial, mourning, or if he was even alive for years. I guess to avoid feeling like a failure as a mom, I did everything I could as a leader in dark times.

Fearless Moment: I mistook my son for my husband. That sounds weird, but I saw my husband’s strength, resilience, conviction, and determination in the demeanor of my son. Once I snapped to it, I realized my son was alive and ready to take his rightful place. We fought against Scar and his tyranny. We pushed back and conquered all of his alliances in the Pride Lands. My son’s  roar signaled new unity among his newly acquired people.

Support System: The pride of course. Simba’s childhood friend and now wife Nala went on a search for him when we needed him the most and I could not leave the pride. And then upon his return, Simba told me about these two guys,  Timon and Pumbaa who looked out for him in the jungle. And who can forget my trusted shaman who blessed my child when he was first born and showed him the way when he was lost.

Final Thoughts: Hakuna Matata. After he came home, Simba would hum this, say this in random conversations, and even draw it in the sand. I never got around to asking what it meant. I’m just always so caught up in him being home safe and stepping up for a role he had to take on way too soon. But every time he says it, something in him resets and he approaches every situation with strength and clarity. So, HAKUNA MATATA.

I'm a Youth Development Professional with strong views and concerns about how the next generation is being nurtured. I'm not looking for perfect parents; just those who are trying to come close. View all posts by clickmybic